Receptor.AI, a UK-based start-up company which integrates artificial intelligence (AI) into drug discovery, just announced the public launch of the SaaS platform for AI-accelerated virtual screening of multi-billion chemical spaces within a few hours. The SaaS platform provides a combinatorial space of 10^16 molecules, can perform a virtual ADME-Toxicity testing and molecules docking, which the company claims can return a considerable hit rate of up to 10% and more.

The multi-directional involvement of artificial intelligence into drug discovery is gradually becoming a routine, starting with the target identification and  having utility at every next step all the way to clinical trials optimization and drug commercialization. It is known that drug discovery is a complex process which may take up to 12-15 years and cost more than $1 billion. This is where AI enters the game with the promise of making the process faster, cheaper and at the same time helping innovate at a different level — discovering previously unknown targets and drug molecules.

In short, the early drug discovery process consists of target and hit identification, which is followed by the lead selection and optimization. In this case hit is an early compound which demonstrates a desired activity in an assay of choice, and lead is the best out of hits. Besides the problem of “undruggable” targets, the hit rate in experimental high-throughput screening (HTS) is very low, typically ranging between 0.01% and 0.14%, to as little as 0.0001% when targeting some protein-protein interactions. AI-based platforms can enhance this process and reduce the costs and time needed.

The Receptor.AI’s platform has been used internally for several months and has shown experimentally validated results in several case studies and ongoing research collaborations. According to the Receptor.AI’s team, their platform was compared with other state-of-the-art algorithms, which confirmed a distinguishably high predictive capability of the developed AI-based platform. 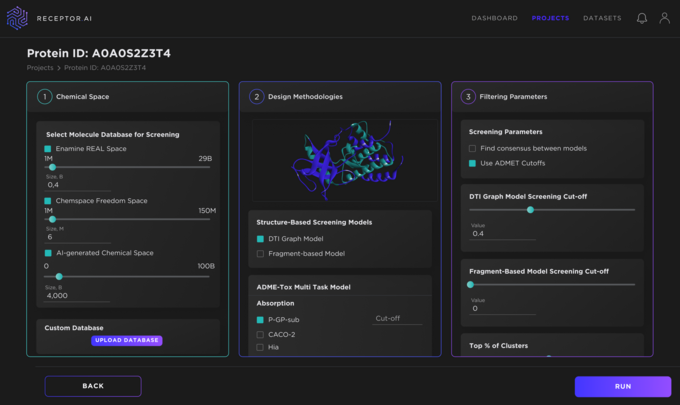 Currently, the SaaS platform includes several modules which assist the user in following the early drug discovery stages. Firstly, there is an AI-based virtual screening module for multi-billion chemical spaces. The module can operate with commercial chemical spaces provided by Receptor.AI’s partners as well as generate molecules based on novel scaffolds with desired parameters.

After the initial screening and obtaining some fraction of potential hits, the ADME-Tox prediction module can assist with assessing further characteristics of the selected hit candidates. The module incorporates more than 40 elaborate AI models, which simultaneously evaluate various pharmacokinetic parameters and potential modes of toxicity.

As Semen Yesylevskyy, CSO at Receptor.AI, commented for BiopharmaTrend: "Our screening platform uses a unique technology of encoding protein flexibility into the graph neural network representation of the target protein, which gives a significant boost of precision for free in terms of computational time and resources".

Lastly, to further narrow down the list of hit molecules, the AI-automated molecular docking module helps performing high-sensitive filtering and ranking of the hit candidates. Applying this technique following AI-based virtual screening provides the accuracy of binding affinity predictions, which is superior to existing competing approaches, as the company claims.

These modules provide an automated experience in finding the hit candidates in case of insufficient ligand data for any human protein which is currently added to the platform. Moreover, the SaaS platform shows an average hit rate of up to 10%, as the company claims.

While being a solution to plenty of drug discovery problems, AI might also be an unaffordable barrier for some smaller laboratories, which do not have enough financial or technical resources to incorporate it into their drug discovery pipelines. Receptor.AI is aiming to improve this situation by democratizing access to AI solutions at an affordable rate. Therefore, the majority of their current project pipelines involve collaboration with universities and university spin-offs.

“The end-to-end AI-based drug discovery pipeline could be very efficient but also very expensive. Big pharma is concerned about the security of its intellectual property, preferring on-premise solutions, which make it difficult to provide high-quality, thorough drug discovery services that can be delivered using SaaS platforms that are more flexible and easily scalable.
In contrast, mid-sized biotech companies prefer to combine cloud solutions with their own resources, employing specific AI-based services at certain stages of their pipeline. We believe that AI-based drug discovery solutions are essential for the industry and society and have to be available for all categories of potential customers” — said Alan Nafiev, Co-founder and CEO at Receptor.AI.

Many companies are now racing towards achieving better drug discovery results with less time and budget — using sophisticated AI systems, and there are known successes in the field, as well as a considerable number of high-profile R&D collaborations involving AI components. According to a report “The Landscape of Artificial Intelligence (AI) In Pharmaceutical R&D”, there are more than 340 companies in the AI-driven drug discovery space. This year BenevolentAI started new projects with AstraZeneca on the drug development for heart failure and lupus on top of the ongoing collaboration. At the same time, the molecule design company Schrödinger is just about to start a clinical trial of its therapy for non-Hodgkin lymphoma, while also having active collaborations with Takeda, Bristol Myers Squibb and others. Also at the beginning of this year Insilico Medicine started clinical trials for its AI-designed anti-fibrotic drug.

Receptor.AI is a new entrant in this race, but the company has already built an impressive modular AI system with its unique aspects of cracking the “chemical big data” problem, and demonstrated considerable ability of its platform to screen ultra-large chemical spaces within record-breaking time frames.