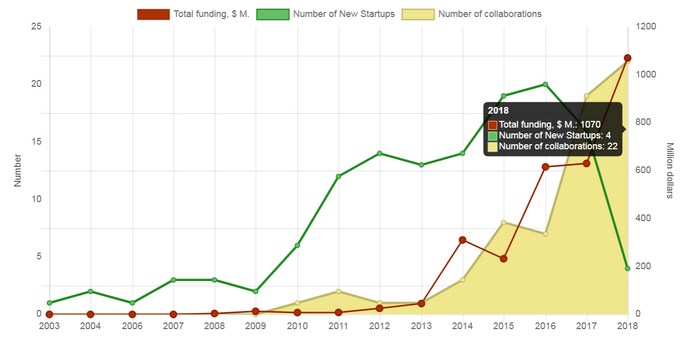 Number of New AI-startups, Amounts of VC funding and Deals With Pharma over Years

(Read a mini-report “A Landscape of Artificial Intelligence (AI) In Pharmaceutical R&D” to have a bird’s view of the most active AI-driven drug discovery startups.)

The January collaboration spree includes a partnership between one of the largest US-based contract research organizations Charles River Labs with Canadian startup Atomwise to apply AI-driven approach to structure based drug discovery (SBDD). If successful, the deal might be generating up to $2.4 billion in royalty payments for Atomwise.

Danish Lundbeck Pharmaceuticals just announced a deal with AI-driven drug discovery company Numerate to utilized its expertise and platform for identification of promising clinical candidates for the treatment of central nervous systems (CNS) disorders, including depression.

While the above partnerships are primarily centered around medicinal chemistry tasks and approaches, boosted by AI-algorithms, the next collaboration between Pfizer and Israel AI-driven biotech startup CytoReason is based on a more biology-centric application of AI modelling capabilities -- including the integrated big-data analysis of omics data related to the functioning of the immune system.

Overall, 2019 might well be a turning point for the pharmaceutical AI market, a transition from “quantity to quality” -- a large number of collaborations and venture rounds observed over the last two years might be yielding initial practical breakthroughs.

(Read a review “2018: AI Is Surging In Drug Discovery Market” to find out more about key industry developments of the past year)
Atomwise CytoReason Exscientia