It took more than eight decades since the landmark experiments on calorie restrictions in 1930th to get to a point when the first wave of new anti-aging drugs began human testing. This first generation of longevity therapeutics, including senolytics, rapamycin, mitochondrial gene therapy, and WNT pathway regulators among others, are not directly targeting aging (yet), rather they aim to treat specific ailments by slowing or reversing a fundamental process of aging. However, the rate of progress in this area allows for some constructive optimism towards being able to actually expand the healthy lifespan in the foreseeable future.

Over the last decade, and especially after the 2013 landmark paper “The Hallmarks of Aging”, published in Cell, the area of anti-ageing research has been booming in many directions — from senolytics discovery, to drug repurposing, stem cells, genomics, discovery of biomarkers of aging (‘aging clocks’) and more. At the beginning of 2020, MIT Technology Review selected anti-aging drugs for their list of 10 Breakthrough Technologies 2020.

Implementation of machine learning (ML) algorithms into the drug discovery process moves the aging research faster as well. Terabytes of epigenomic, transcriptomic, proteomic and metabolomic data (so-called ‘omics data’) are used to measure the biological age and build ‘aging clocks’ with the help of ML, where it also serves as a tool to discover new biomarkers. It is remarkable that such clocks are ‘calibrated’ not by the chronological age, but by the set of aging phenotypes, which was comprehensively summed up in the recent Nature paper “Measuring biological age using omics data”, published in June 2022. On the other hand, AI-powered platforms can enhance the target identification and prioritization process while considering the known molecular aging pathways. Insilico Medicine’s platform PandaOmics was shown to identify novel targets for some neurodegenerative and other age-associated diseases, which can be further used for the drug discovery. These findings can be also combined with other Insilico Medicine’s platforms for drug design and clinical trials results prediction, while translating the knowledge from other disease areas.

The anti-aging drug discovery startup ecosystem is still in its early days but is rapidly expanding at the same time, already having a little more than 150 emerging companies. A few candidates have made it to phase III clinical trials, and venture capital investments into longevity-focused companies continue growing over the last few years and will probably keep that trend up — until the inflection point when the first anti-aging drug is approved for the market. At the moment of going “from zero to one” the longevity industry is expected to flourish even more with investments and acquisition deals. Already today some longevity-focused companies achieved striking funding levels and multi-billion dollar valuations (e.g. Biosplice).

The below chart summarizes some notable companies across the so-called “hallmarks of aging” classification framework — specific mechanisms believed to be the key drivers of body deterioration over years. Those include the four primary hallmarks, precursors of damage: genomic instability, telomere attrition, epigenetic alterations, and loss of proteostasis. They catalyze a series of responses to damage — antagonistic hallmarks: deregulated nutrient sensing, mitochondrial dysfunction, and cellular senescence. Finally, the integrative hallmarks appear to be the culprits of the phenotype: stem cell exhaustion, and altered intercellular communication. 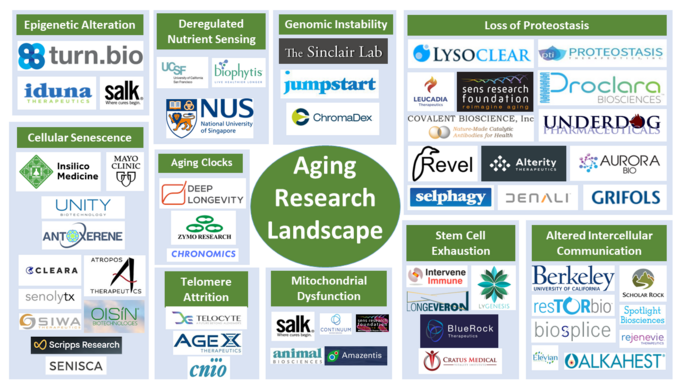