Efficient quantum computing is expected to enable advancements that are impossible with classical computers. Scientists from Japan and Sydney have collaborated and proposed a novel two-dimensional design that can be constructed using existing integrated circuit technology. This design solves typical problems facing the current three-dimensional packaging for scaled-up quantum computers, bringing the future one step closer.

Quantum computing is increasingly becoming the focus of scientists in fields such as physics and chemistry, and industrialists in the pharmaceutical, airplane, and automobile industries. Globally, research labs at companies like Google and IBM are spending extensive resources on improving quantum computers, and with good reason. Quantum computers use the fundamentals of quantum mechanics to process significantly greater amounts of information much faster than classical computers. It is expected that when error-corrected and fault-tolerant quantum computation is achieved, scientific and technological advancement will occur at an unprecedented scale.

But, building quantum computers for large-scale computation is proving to be a challenge in terms of their architecture. The basic units of a quantum computer are the “quantum bits” or “qubits.” These are typically atoms, ions, photons, subatomic particles such as electrons, or even larger elements that simultaneously exist in multiple states, making it possible to obtain several potential outcomes rapidly for large volumes of data. The theoretical requirement for quantum computers is that these are arranged in two-dimensional (2D) arrays, where each qubit is both coupled with its nearest neighbor and connected to the necessary external control lines and devices. When the number of qubits in an array is increased, it becomes difficult to reach qubits in the interior of the array from the edge. The need to solve this problem has so far resulted in complex three-dimensional (3D) wiring systems across multiple planes in which many wires intersect, making their construction a significant engineering challenge. 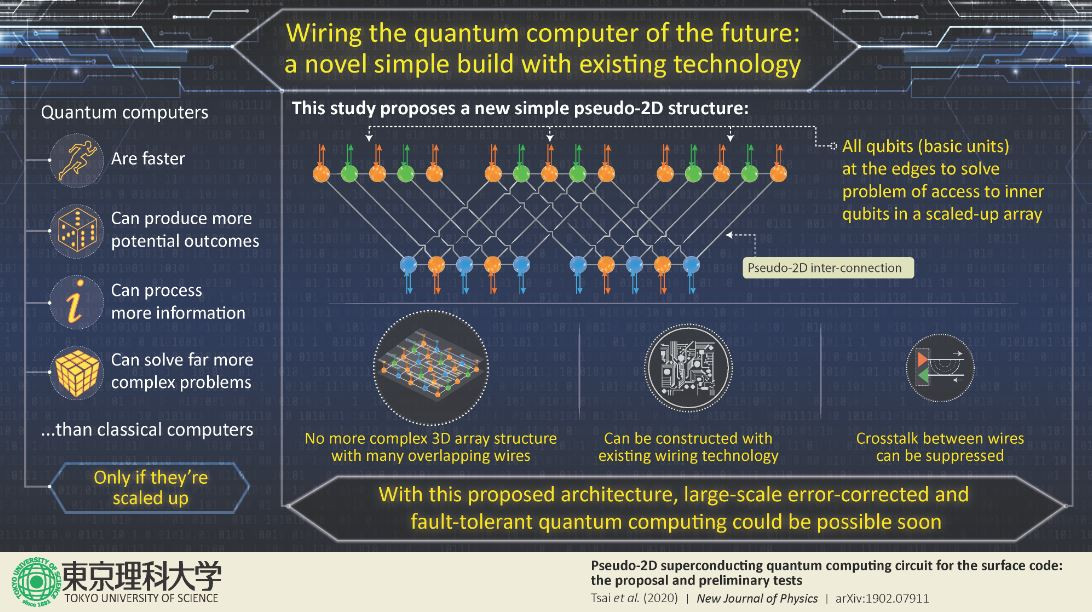 A group of scientists from Tokyo University of Science, Japan, RIKEN Centre for Emergent Matter Science, Japan, and University of Technology, Sydney, led by Prof Jaw-Shen Tsai, proposes a unique solution to this qubit accessibility problem by modifying the architecture of the qubit array. “Here, we solve this problem and present a modified superconducting micro-architecture that does not require any 3D external line technology and reverts to a completely planar design,” they say. This study has been published in the New Journal of Physics.

The scientists began with a qubit square lattice array and stretched out each column in the 2D plane. They then folded each successive column on top of each other, forming a dual one-dimensional array called a “bi-linear” array. This put all qubits on the edge and simplified the arrangement of the required wiring system. The system is also completely in 2D. In this new architecture, some of the inter-qubit wiring—each qubit is also connected to all adjacent qubits in an array—does overlap, but because these are the only overlaps in the wiring, simple local 3D systems such as airbridges at the point of overlap are enough and the system overall remains in 2D. As you can imagine, this simplifies its construction considerably.

The scientists evaluated the feasibility of this new arrangement through numerical and experimental evaluation in which they tested how much of a signal was retained before and after it passed through an airbridge. Results of both evaluations showed that it is possible to build and run this system using existing technology and without any 3D arrangement.

The scientists’ experiments also showed them that their architecture solves several problems that plague the 3D structures: they are difficult to construct, there is crosstalk or signal interference between waves transmitted across two wires, and the fragile quantum states of the qubits can degrade. The novel pseudo-2D design reduces the number of times wires cross each other, thereby reducing the crosstalk and consequently increasing the efficiency of the system.

At a time when large labs worldwide are attempting to find ways to build large-scale fault-tolerant quantum computers, the findings of this exciting new study indicate that such computers can be built using existing 2D integrated circuit technology. “The quantum computer is an information device expected to far exceed the capabilities of modern computers,” Prof Tsai states. The research journey in this direction has only begun with this study, and Prof Tsai concludes by saying, “We are planning to construct a small-scale circuit to further examine and explore the possibility.”

About the Tokyo University of Science

Tokyo University of Science (TUS) is a well-known and respected university, and the largest science-specialized private research university in Japan, with four campuses in central Tokyo and its suburbs and in Hokkaido. Established in 1881, the university has continually contributed to Japan's development in science through inculcating the love for science in researchers, technicians, and educators.

With a mission of “Creating science and technology for the harmonious development of nature, human beings, and society", TUS has undertaken a wide range of research from basic to applied science. TUS has embraced a multidisciplinary approach to research and undertaken intensive study in some of today's most vital fields. TUS is a meritocracy where the best in science is recognized and nurtured. It is the only private university in Japan that has produced a Nobel Prize winner and the only private university in Asia to produce Nobel Prize winners within the natural sciences field.
Website: https://www.tus.ac.jp/en/mediarelations/

About Professor Jaw-Shen Tsai from Tokyo University of Science

Dr Jaw-Shen Tsai is currently a Professor at the Tokyo University of Science, Japan. He began research in Physics in 1975 and continues to hold interest in areas such as superconductivity, the Josephson effect, quantum physics, coherence, qubits, and artificial atoms. He has 160+ research publications to his credit and serves as the lead author in this paper. He has also won several awards, including Japan’s Medal of Honor, the Purple Ribbon Award.